Whether you’re looking for new international investment opportunities or simply wondering where the government will get the least of your vacation dollars, it’s handy to take a look at foreign countries’ tax structures. Your Survival Guy has been spending more time in Europe again now that COVID regulations have subsided a bit, and it’s important to pay attention to what you’re up against when you travel.

The ITCI’s individual tax component scores OECD countries on their top marginal individual income tax rates and thresholds, how complex the income tax is, and the tax rates levied on income from capital gains and dividends. 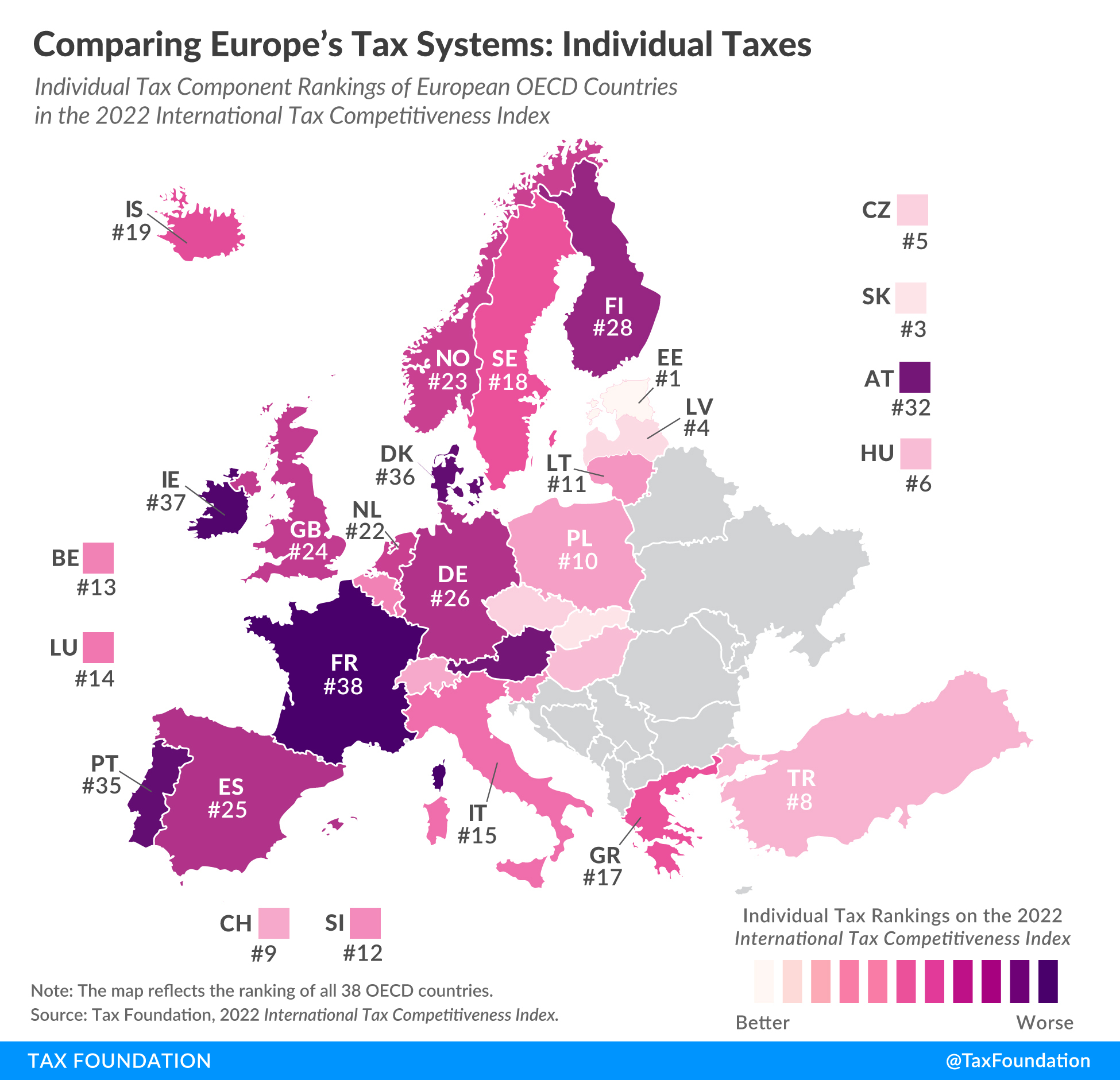 Estonia has the most competitive individual tax system in the OECD. The Baltic country levies a top marginal income tax rate of 20 percent on wage income, the second lowest rate in the OECD. Estonia applies the top rate at 0.33 times the average national income, making it a relatively flat income tax.

Estonia’s labor tax payments are largely automated, resulting in one of the easiest income tax systems to comply with in the OECD. Estonian policymakers prioritize simplicity which is consistently evident throughout the tax code.

Due to Estonia’s cash-flow tax on business profits, there is no separate levy on dividend income, setting the dividends tax rate to zero percent. Capital gains are taxed at a rate of 20 percent, close to the OECD average of 19 percent and aligned with its corporate tax.

In contrast, the French individual income tax system is the least competitive of all OECD countries. France’s top marginal tax rate of 45.9 percent is applied at 14.7 times the average national income. Additionally, a 9.7 surtax is applied to those at the upper end of the income distribution. Capital gains and dividends are both taxed at comparably high top rates of 34 percent.

The Baltics, the Nordics, Switzerland, and the Visegrad nations, including Czechia (formerly the Czech Republic), Hungary, Poland, and the Slovak Republic, are well-represented in the top tiers of this year’s rankings. Estonia’s top ranking in individual and property taxes, and second-best rank in corporate taxes, drove it to the top spot overall.

Your Survival Guy is unfortunately stuck paying France’s consumption tax, ranked 33rd in Europe when shopping along Avenue Montaigne, but I don’t mind—too much. Joining France in the bottom tier are other favored American vacation destinations like Italy, Portugal, and Ireland.